Sometimes we tend to forget how beautiful the simple things in life can be.

Take for example the bark wrapped around a tree trunk.

Ever since I was a little boy find, up until this very day, I believe it to be something quite amazing.

She could have been a Gudrun, a Dagny or a Bjork.

It was hard to tell, observing the girl through a plume of water vapor, even for a future spirit.

It takes an effort to shift shape from sulfiric water vapor into a something that even rometely resembles a future spirit. Taking shape is like running a marathon times ten. Not that I ever ran one.

Holding on to the shape of a future spirit, let’s say to write something down, is even harder to do.

She could have been six, or seven, maybe even ten.

It’s was hard to tell, watching her from afar.

She looked as if she knew exactally what she was doing and where she was going.

Every step she took: firm but carefull.

Her eyes: fixed on the spot where the ground breaks open, blending orange en grey into a color with no name.

that’s just the way it goes

in love and life

but at cathedral cove

it was really hard to be alone

Isn’t it amazing? Almost 50 years after Waterloo (1974) ABBA still is very much alive.

Sometimes I wonder why that is…. What exactly makes them stand out in such an extraordinary way? 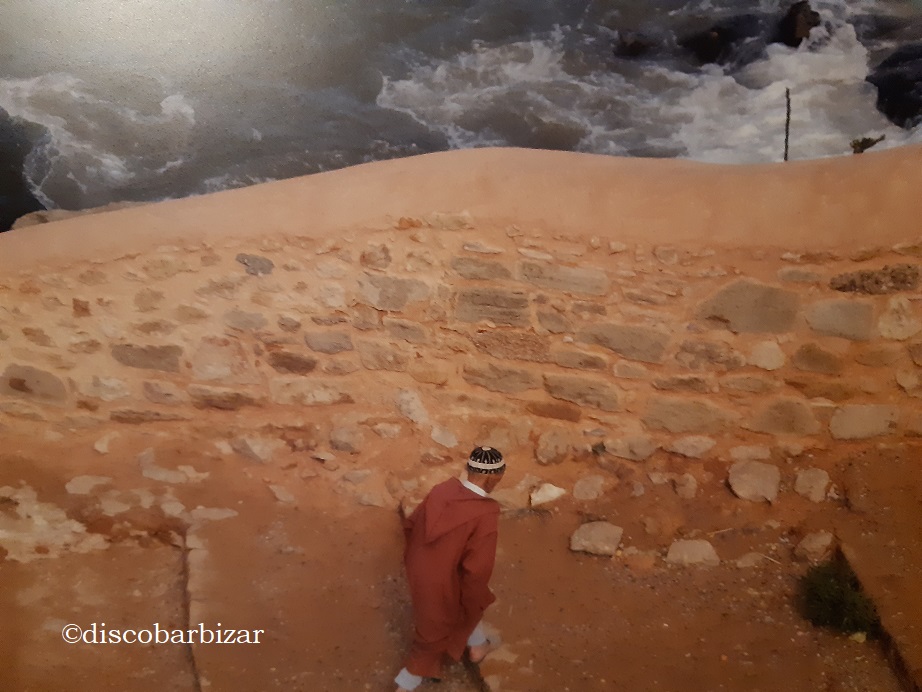 Somewhere on the road to Compostela

(The best road to be lonely on)

(The best place for shellshock)

How will they write about today, when all the suffering is done and the scientific battle won?

Will future historians write glorious words, such as those about the landing on the moon, or will they tell  a bitter tale?

Barely seven days after his nocturnal walk, the 78-year-old Jan Severanckx stood before a judge. The judge’s mouth mask could not hide boredom and displeasure.

Months earlier, during the first wave, Jan had lost his wife. The monster called COVID had captured Marieke, shook her fragile, dementing body in a fierce rage, and left her to die in the nursing home. Jan was not allowed to say goodbye. Goodbyes were inconvenient, because the cure for the virus was cold loneliness and isolation.

Months passed, and Jan still felt miserable for not being close to his wife during those final weeks. And it was anything but a consolation that -instead of him- a priest had sat next to Marieke. The sick basterd even administered a final anointing, whilst Jan was kept at bay.

As a logical consequence of a nice life Jan stood before a judge for the very first time. Thus Jan was hopeful. What he had been up to was not allowed, but Jan also figured that it really wasn’t the end of the world either.

Seven days earlier, Jan had admitted to the officers that he knowingly broke the curfew. Because he had noticed, just before going to bed, that snow flakes started to fall. And he dreamed fairylike images of a city center covered in snow. But then all of a sudden he was worried: if there is no one around downtown to watch the flakes come down , will there be snow? Or will it be as if nothing has happened?

With that question – whether something is real when there is no one to see? – he and Marieke had spent many an hour in the past, as did Einstein and Bohr about a century earlier. She had certainly believed that it just might well be, he that we cannot know such things.

Now he was standing in front of the judge, looking a bit uncomfortable.

It took Jan a while to understand that it was not a question but a verdict.

Jan was allowed to go. But he still wanted to know. He took a cab into town, where the thaw had started and the sun already had the taste of spring. Still Jan saw traces of snow on roofs, behind corners and between crevices not that long ago. He smiled.

Jan left his wallet and a mouth mask on the bench by the bridge. Finally at last nothing but past.

The soft light of winter and a special conspiracy filter (made from polarized and tripple filtered obsidian glass) clearly proofs that the moon is hanging by a thread in the heavens.